Did you have a resolution to eat healthier but haven’t really started?

It’s never too late to start eating healthier, according to Melinda Scholten, registered dietitian for NorthBay Healthcare, and there are some highly recommended diets that will help guide the way. In fact, three rise to the top of many dietitians’ lists: the Mediterranean, the DASH and the Flexitarian diets.

Scholten and the Nutrition Services team at NorthBay are in agreement with a panel of dietitians, nutrition consultants and physicians who placed those three diets at the top of a recent U.S. News & World Report poll.

The Mediterranean diet puts an emphasis on eating whole grains, fruits and vegetables, legumes, nuts and seeds, olive oil, and some lean meat and fish. It was No. 1 in the magazine’s poll.

“What we like best about the Mediterranean diet is that it is easier to follow, includes a lot of flavor and is a pattern of eating that can be sustained long-term. It emphasizes what to choose, not what to take away,” Scholten noted, “and while followers of the Mediterranean diet may lose weight, the main benefit of it are the health benefits it offers, particularly for improvements in cardiovascular health.”

The second-place DASH diet is a plan designed to lower blood pressure by consuming more vegetables, fruits and low-fat dairy along with whole grains, lean meats and nuts, seeds and legumes. It also follows sodium guidelines that will help reduce hypertension.

“I love the fact that a pattern of eating can lower blood pressure, and it confirms the thought of ‘food as medicine,’ ” Scholten said. “DASH helps people fill in nutritional holes, such as vitamins, minerals, phytochemicals, antioxidants, and when that happens bodies can function at a higher level.”

“It emphasizes plant-strong eating with the flexibility to include from nine to 28 ounces of meat or fish per week. People may find it easier to implement for families with a variety of eating styles, and it may also have benefits for the environment.”

Whatever plan you choose to follow, know this for sure: Any increased focus on plant-based foods is one of the best things you can do for your health, and a number of studies support this, according to U.S. News & World Report.

One study, published in August 2019 in the Journal of the American Heart Association, concluded that people who closely adhered to plant-based diets had up to a 25% lower risk of dying from any cause compared with those who didn’t follow the eating pattern. The Journal of Geriatric Cardiology noted that eating a plant-based diet is associated with a lower risk for type 2 diabetes and heart disease.

The National Heart, Lung, and Blood Institute funded three studies examining the health benefits of DASH, and found it can lower blood pressure and LDL, or “bad,” cholesterol levels, as well as help people lose weight, when compared with diets such as the Standard American Diet, which is known to be high in salt, added sugar and saturated fat.

As for the Flexitarian diet, in a review of 25 studies, the eating style was shown to help with weight loss, improve blood pressure and reduce the risk of type 2 diabetes, according to a study published online in January 2017 in the journal Frontiers in Nutrition.

“Nutrition is a work in progress,” Scholten notes, “and every day we get a new shot at nourishing our bodies to the best of our abilities.”

Sun Feb 20 , 2022
SALISBURY — The pandemic has been an inflection point for many Americans. People have changed career paths, moved and reshuffled their priorities — or at least cleaned out their garages. Dr. John Bream, who was overseeing the emergency department at Novant Health Rowan Medical Center when COVID-19 spread to the […] 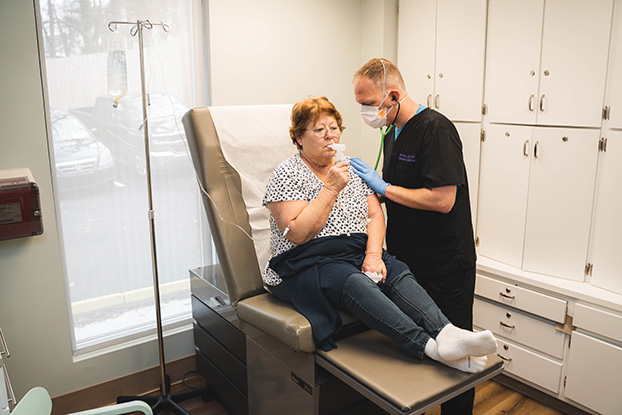