Dr Julie Smith, 37, is a clinical psychologist who has a private practice in Hampshire and has spent 10 years working for the NHS. In November 2019, she started making TikToks containing clear, engaging advice about various mental health issues. She has more than 3 million followers and in January published her first book, Why Has Nobody Told Me This Before?, which has spent four weeks at the top of bestseller lists.

There are a lot of self-help books published; why do you think yours has struck a chord?
I think people like the fact that it’s evidence-based. I’m a clinical psychologist, so the things I’ve put in there have been scrutinised with the latest research and they are things that are taught to people in therapy, depending on what they’re going to therapy for. They are also life skills that we can all use.

Everyone’s had days when their mood is lower than they would like it to be or days when they’re dealing with more stress, grief, or anxiety – all those normal human feelings that can hold us back or be a struggle to cope with if we don’t have the right skills. Also we’ve just come through a pandemic and I think lots of people are thinking: “How can I pull myself through this?”

How did you segue into social media and TikTok?
When I was offering psychological therapies, I found a lot of people didn’t realise that a part of therapy is educational. You do a lot of talking and working out your problems, but you also learn a little bit about how your mind works, how you can influence your mood and your emotional state and how then you can affect your day-to-day mental health.

People found that educational aspect so empowering that there was a shift in their ability to manage their mental health day to day. So I would come home and harp on to my husband about how this stuff should be more available, that people shouldn’t have to come to me to find out the basics, and he said: “Well, go on then, make it available. Put it on YouTube or something.”

Giving people tools – that’s cognitive behavioural therapy isn’t it?
There’s a mix in there. I’ve tried to keep it to everyday tools. I’ve been very careful about that distinction: “This is the educational element of therapy, it’s not therapy.” These are tools that you can put into use today and tomorrow, but the book’s not a therapist.

Social media is often blamed for young people’s mental health problems, especially self-esteem and anxiety…
A portion of my videos have been about trying to remind people that what they see on social media isn’t always real. To be mindful when they’re spending time with certain content of how it makes them feel and to use social media to enhance their life rather than take away from it.

Social media behaviour such as ghosting, trolling or blocking can be distressing. What advice do you give people who find being online quite brutal?
It’s about recognising that you have the power of choice. You have a choice how long you spend online, you have a choice about who you follow and who you don’t and the content you engage in. When you get into mindless scrolling, it can feel like you don’t have a choice.

So my videos have really been about reminding people and helping them to build that awareness – that if this is impacting you in a negative way, you are one decision away from something different.

There’s a line that often circulates that gen Z and millennials are more prone to mental health problems, that they’re snowflakes basically. What would you say about that?
It’s not something I would engage with at all. Mental health is, for me, no different to physical health. No one is immune. If you take anyone and you start messing around with their core defences, things such as sleep, routine, social connection, nutrition and exercise, then that person will become vulnerable to both physical and mental health problems.

I think more people are starting to realise that now and that’s helping to tackle the stigma around mental health. It’s a much healthier way to view things.

So people are just better at naming things nowadays, rather than actually being more fragile?
You are not more physically fragile for talking about your physical injuries. There aren’t more broken legs just because we plaster them up now. It’s moving in the right direction, but you’ll always get some kickback, that’s how change happens.

“Metacognition” is key concept in your book; why is it important?
It is kind of thoughts about your thoughts. It’s one of the main tools that we utilise in therapy – being able to step back from your thought processes and observe them. By doing that, you get to see them for what they are.

People often think therapy is about changing your thoughts. Actually, you can’t decide what thoughts are going to pop into your head – it just happens. The bit you get to choose is how much air time you give each thought.

So therapy is often about accepting thoughts as they arrive and then making choices about what you do with them. If I spend time with these thoughts, is that going to help me move forward where I want to go? Or if I spend time with these, what impact is that having that’s different? It’s allowing your brain to come up with whatever it comes up with and then choosing what to do next.

There’s a chapter in your book titled “How do you make yourself do something when you don’t feel like it?”. We’ve all been there. What’s the answer?
There are always things that we don’t feel like doing. There’s something that’s taught in a therapy called dialectical behaviour therapy, DBT for short, which is opposite action. Mindfulness is a really helpful element of this, where you become aware of the urges to act. So each feeling will give you an urge to do or not do something. And often you’ll feel the feeling and you’ll go and do the thing and you haven’t really separated out the urge and the action – you just do it all in one go.

But what you can do is begin to build awareness of an urge and start to recognise that you don’t have to act on it: you can act opposite to it. This becomes a tool that you can use in those little moments that seem insignificant, but actually add up.

How do you think your content might change as we (hopefully) leave the pandemic behind?
I don’t imagine for a minute that because the lockdowns have ended the psychological fallout will. People are dealing with huge amounts of loss. Not only where people have lost family members and friends, but also where they’ve lost livelihoods, jobs, financial security, homes, a sense of safety going out. There are huge amounts of changes that will continue for people.

The cost of therapy puts it beyond the reach of most people and there’s limited availability on the NHS. How do you square this with the increased number of people who are coming forward?
That’s partly why the book felt such a timely thing to do. I can’t give everybody one-to-one therapy, but I can do something. I can share some basic education as widely as I can.

I had no interest in being a public person or being on social media – it was really about sharing that information. And it was difficult to do. I’ve got three children and a job and the thing that kept me going was the feedback. It’s just been overwhelming. Every day, people message saying: “Thank you so much. This is making a difference.” It’s not an ideal world and I don’t have all the answers, but I can put my bit in.

Mental health is on full display at the Winter Olympics

Sat Feb 12 , 2022
Snowboarder Jamie Anderson — a two-time Olympic gold medalist — fell multiple times during the women’s slopestyle competition, finishing in ninth place. This week, she opened up about the incident, saying the cause was not physical but mental. Winter athletes took notice. “I think what Simone did at the last […] 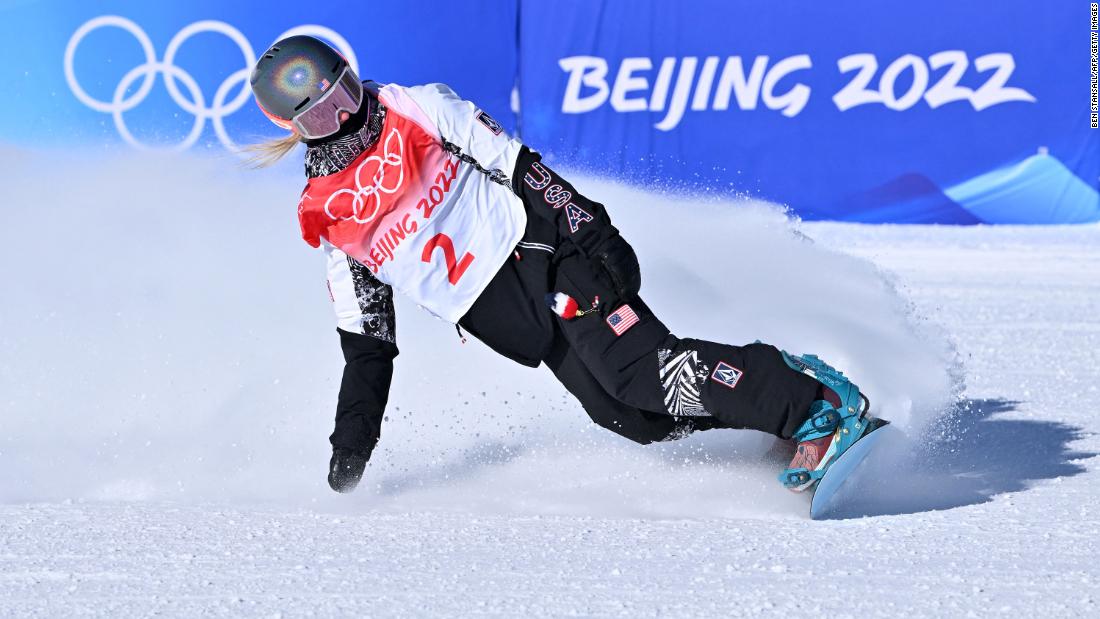