Walk into any coffee shop or health food store and you’re almost guaranteed to find this bright jade-colored powdered green tea. It’s mixed into lattes, milkshakes, sodas, hot chocolates, smoothies — and even in desserts like ice creams and brownies. It’s recommended by many as an antioxidant-packed superfood that can prevent cancer, improve memory, and reduce stress and anxiety. That’s enough to persuade almost anyone to drink matcha. But does it actually live up to the hype?

Matcha is a type of powered green tea that has traditional roots in tea ceremonies in Japan, and has become popular in the United States and elsewhere. It comes from the same plant (Camellia sinensis) as other caffeinated teas, and is cultivated in an unusual way: The tea plant is shaded from excessive sunlight for much of its growing period so that it can produce more amino acids and biologically active compounds, like chlorophyll and theanine. Once the leaves are harvested, they’re ground into a fine powder.

Does matcha have health benefits?

Whereas other green tea leaves are usually steeped whole in hot water, “matcha is much more concentrated in terms of the ingredients because it’s made from ground whole tea leaves,” said Dr. Frank Hu, a professor of nutrition and epidemiology and chair of the department of nutrition at the Harvard T.H. Chan School of Public Health.

And while the research on its health benefits is not definitive, experts say that matcha does contain high amounts of potentially beneficial compounds.

Antioxidants. “As we age or as we’re exposed to things in the environment, like ultraviolet light or carcinogens, we end up with reactive oxygen species and they do harmful things like damage our cellular membranes,” said Jamie Alan, an associate professor of pharmacology and toxicology at Michigan State University.

The Facts Behind 5 Supplements

Collagen. Collagen, is one of the most abundant proteins in the body and helps form our skin, bones, muscles, tendons and ligaments. As we age, we naturally start reducing its production. Some studies show that taking collagen supplements can reduce signs of aging, increase bone density and improve joint, back and knee pain. But many of these studies are small and funded by the companies behind such products, increasing the opportunity for bias. Certain products also have flaws that reduce the likelihood of their efficacy: Topical creams, for example, are unlikely to make it into the deeper level of the skin where collagen is produced.

Vitamin B6. This essential nutrient is involved in a number of chemical reactions that are important for the proper functioning of the immune and nervous systems. As with the other essential vitamins, the body cannot produce B6 on its own, so you can only get it from foods (such as tuna, salmon, chickpeas, poultry, dark leafy greens, bananas, oranges, cantaloupe and nuts) or supplements. Most healthy adults get more than enough vitamin B6 from their diets alone, so B6 supplements are generally not needed.

Vitamin D. Our bodies need this vitamin for the gut to absorb calcium, which bones need to grow and stay healthy. But a large study in the United States reported that vitamin D pills taken with or without calcium have no effect on bone fracture rates and a host of other ailments like cancer and cardiovascular disease. Even so, some people, including those with conditions like celiac and those who are deprived of sunshine, however, may find the supplements useful.

Antioxidants, which are abundant in matcha, are substances that “neutralize” those harmful molecules, Dr. Alan said, preventing a “whole cascade of damaging downstream events.” The tea therefore may theoretically help protect the body’s cells from damage and reduce the risk of certain health problems like heart disease or cancer, Dr. Hu and Dr. Alan said, though this has not been proven.

L-theanine. This unique amino acid, which can be found in green tea as well as certain mushrooms, is another component of matcha that experts highlight as potentially benefiting health. However, the evidence on how it might do so is weak, Dr. Hu said. Some small, placebo-controlled trials have suggested that L-theanine may improve cognitive performance and reduce stress. But there have been only animal studies and a few small trials in humans, both experts noted.

Caffeine. While most people might not think about caffeine’s health effects when drinking their morning cup of coffee, the evidence for its health benefits is fairly strong, Dr. Hu said. Studies have found, for instance, that caffeine can increase cognitive function and alertness and ramp up metabolism. And regular consumption of coffee — the primary source of caffeine for adults in the United States — has been associated with a reduced risk of diabetes, heart disease, liver disease and age-related cognitive decline, Dr. Hu said.

So is matcha healthy?

Few studies have focused specifically on how matcha might benefit health, so it’s hard to say for sure. But scientists do have a fairly good understanding of green tea’s benefits. “There is a lot of research on green tea, and the overall evidence indicates that it is a healthy beverage,” Dr. Hu said. “We don’t have similar evidence for matcha, but given that matcha has the same ingredients as green tea, just in much higher concentrations,” he continued, it’s probably safe to infer that it offers the same benefits.

Dr. Alan also stressed that while matcha is generally safe, certain people — including those who must limit their caffeine intake because of a health condition — should probably avoid it. “If you are prone to arrhythmias or if you have heart disease, then matcha could be harmful for you,” she said. People who are sensitive to caffeine may also want to pass on matcha because it could cause anxiety and disrupt sleep.

In general, Dr. Hu said, matcha can be a healthy addition to your diet, as long as you’re mindful of how much sugar and other unhealthful ingredients you’re consuming along with it. The amount of sugar and cream people add to their daily coffee or tea “has become so enormous that it really counteracts the health benefits,” Dr. Hu said. And if you eat a lot of fast food or smoke cigarettes regularly, don’t expect matcha to counteract those unhealthy choices.

“If you develop a habit of regular matcha consumption, in the long run you may get some health benefit,” Dr. Hu said. “But if you just sprinkle some matcha powder on top of chocolate ice cream, then I don’t think it will do much to help.”

Annie Sneed is a science journalist who regularly contributes to The New York Times. She has also written for Scientific American, Wired, Public Radio International and Fast Company. 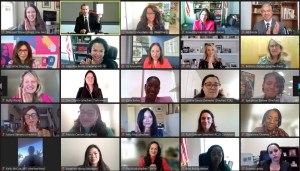