About:
Meat Possible is a game about how the warrior Lunaya Saves her kingdom or clan from the   piggies and canibals. Its a kind of endless side-scrolling flyer action arcade game which depicts the tragical events taking place in the outskirts of the kingdom of epicton fight in this epic aerial adventure against the pigs and the flies as you bring back peace to your kingdom
Comic Story:
the interesting thing to notice about this game is that it has an Pre Funtional
Comic story which is Really good to see and no other games were did in this way , Developer and Creative crew has did something different from the normal and natural gaming. the way they designed the comic was really awesome
Anime Lovers would like to play this Game
here is the link to view the comic-  Click Here


Seeing as how I wanted to give the game more of a chance before I started to write my review, I kept playing more and more of it  until I felt that I had seen enough got the hang of it by around the near nine-hour mark. As I continued to play the game, I often asked myself if I was playing the game because I actually enjoyed it or if I simply felt compelled to play more of it since that’s just what I do. Surprisingly, it’s because I ended up enjoying the game. This is one of those games that gets better the more you play and realize how things work. This is a good thing because some games start to get boring the more you play them. I’m sure some will eventually feel that way with this game, but it wasn’t like that with me.


Even though this game is heavily flawed, it’s not totally bad. It’s not great, but it’s also not the worst thing I’ve ever played. It could be improved upon to become a good game, it just requires a lot of polish and a chance to realize what the game wants out of you and what needs to be done to be enjoyed. In its current state, the game is decent and will be enjoyed by some. At the same time, I predict many will have similar experiences with the game as I initially did, but the thing is I see them not giving it a second chance. While not being a must play game, I still think it has some worthwhile elements that’ll keep you entertained for a few hours.


MP 1.5 is an endless “runner” type game with game play like Gradius and the airplane levels in Cup head. One main difference between this game and those is that this game doesn’t offer as much control as they do. What I mean is that so much of what goes on in this game is automatic. You don’t feel very in control of what goes on, a lot feels very random.
You have to destroy enemies and rocks one after the other before you automatically unleash a special combo attack, but I feel as if things would be better if I could store these combo attacks for moments like a challenging boss fight or an instance in which the screen is full of too many enemies/rocks to be able to dodge. There is one special offensive ability that is stored, but it’s very limited and you have to purchase it. The combo attacks in this game are pretty much unlimited, but you have to work towards getting them and you can at times end up using them even if you didn’t mean to. 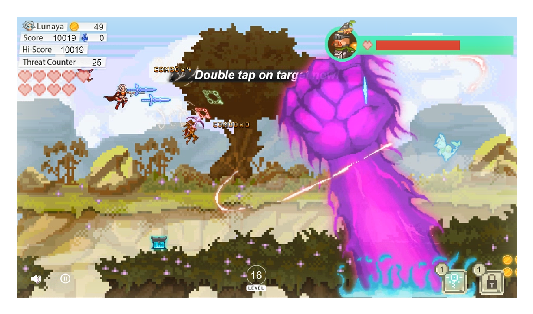 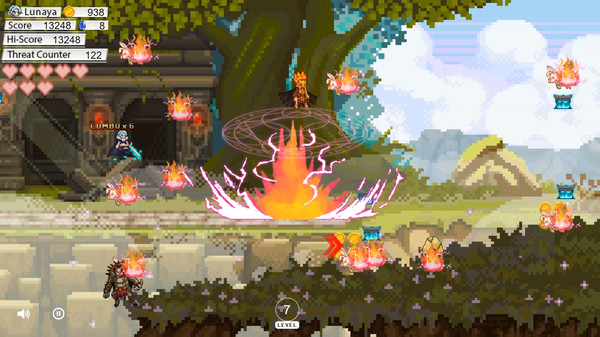 Throughout your run you’ll also encounter three mini games. A slot machine where you have to at least match up twice to get coins or more health and two shooting gallery type mini games where you’re mainly taking out flying rocks and flies. The main point of these mini games is to offer something slightly different from the main gameplay, but it also works to reward you by offering coins and more health if you are successful in accomplishing what they ask of you. Even though they’re interesting the first few times you play them, they quickly get very boring. After having played through every mini game multiple times, I started to avoid them and only felt the need to play them when I needed more health. The problem with this is that not every mini game offers health so most of the time you’re forced to play something you don’t really want to.
MP 1.5 is a game where its graphics/visuals vary a lot. The art/visuals looking great in some areas and looking bad in most of the others is a bit frustrating. This is especially noticeable with the game’s intro. Its absolutely stunning pixel art in the intro looks like it could’ve easily been part of the SNES’s heyday and it made me wish the entire game looked like that, (kind of how some anime has great animated intros while also having crap animation during the rest of the show) but at the same time, the rest of the game just looks very bland.
Due to the game’s rough looking backgrounds, my first thought was that the game felt and looked like a simple flash game that you’d find on newgrounds. That was one of the first things that made me feel that this game was more of a mobile game meant for smartphones. I doubt all of this would be that noticeable on a smaller screen, but since I do play on a 27 in 1440p/144hz monitor, every flaw is more noticeable. I realize graphics, art, and the overall visuals aren’t as important as gameplay, but at the end of the day, presentation matters.
Some games are done in such a way that you end up interested in the lore, even if it’s not presented in an obvious way, much like Dark Souls, but this game isn’t like that. I know that there’s a story behind the game, mainly because there are comic book chapters that go along with the game, which the developers refer to the whole combination of game/comic as being trans-media, but its overall gameplay doesn’t make me interested in what’s going on. There are instances of storytelling in the game, mainly through brief statements from your combo specialists, but they’re very few and far apart. The intro has some comic book panels that give you a brief intro (extremely brief, they go by very fast and give you a small window of time to read them) as to what’s going on, but after that, there’s not much present during the actual gameplay.
Seeing as how collecting coins/jewels is a big part of this game, it’d make sense that the point of collecting these valuables is to use them to make purchases in the shop menu. Still, the shopping system in this game feels a bit weird. You can use coins to buy upgrades, which make the game a bit easier to deal with, but they eventually become useless if you buy too many of the low-level upgrades (score multipliers, start with more hearts at the beginning of the game).
Despite the setting and what’s offered to you before you start playing, this game didn’t really motivate me to look deeper into the lore. Plus, I can play through the game without really having to know the in-depth story. It can basically be summed up as your kingdom is under attack and you have to defend it. I don’t want to disparage the game, but what it offers through its game play is similar to Tetris. What I mean is that Tetris is a game that’s fully about its game play, there are no story elements at all and MP 1.5 is similar by having 80-90% of it being just about the gameplay. It can get pretty intricate with what you can do and how you approach what needs to be done, but knowing or not knowing the story being presented won’t hold you back from enjoying the game. I’m sure it’ll interest some people and it may make them seek out the comic book chapters, but I don’t see that happening with the average player of this game.

I can frankly say that this is the game for anime lovers and it is presented in this way that no one could easily finish that , if you really bored of playing ordinary computer games then give it a try!..
play this game to win the cash amount of 100$
click here to play the contest and win cash money- contest
Click here to download the game-  Download
Share:
Arts & Games SYL review
1
165
0
Share:

Update Your Old Furniture with a Good Cleaning and Accessories